Menu
Log in
Register
Install the app
You are using an out of date browser. It may not display this or other websites correctly.
You should upgrade or use an alternative browser.

Status
Not open for further replies.

And if you all look carefully Brians video, you will notice something about his left wrist: 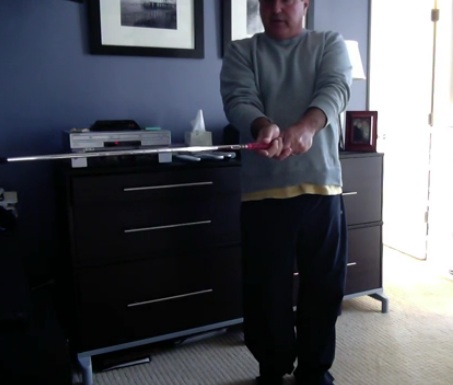 He has mainly get his left wrist to radial deviation side (thumb moved toward radial), not palmar flexion. So it's not arched/bowed, it'a actually quite flat. Totally different move.

Can you use your hand to fan your face as if you were hot? That's arching your wrist. You do not TWIST YOUR FOREARM to arch your wrist.
K

Why is this guy trying to help a "chronic slicer with a super duper bent (cupped) left wrist at the top", by advocating a flat left wrist to help slicers? Could it be that a cupped left wrist (at the top) encourages an open face at impact?

This whole argument is disingenuous. Of course the shaft twists during the swing. We're talking about a dynamic golf swing, not a static three way positional demonstration holding the club out in front you trying to make an obscure point. Bingo, bango, bongo.

If a chronic slicer comes to Brian Manzella and has a "super duper bent (cupped) left wrist" is he going to encourage this golfer to bend (cup) the left wrist more at the top to close the face at impact? I doubt it. He's going to teach him to "twistaway" or counter rotate the club to get rid of that cupped left wrist and stop that slice.

So, in an actual golf swing, if a bent left wrist (cupped) encourages a slice (open face). And a flat left wrist closes the face more than a cupped left wrist does, then we can reasonably assume a bowed or arched left wrist would close it more.

Again, a disingenuous argument. The golf swing is dynamic, not static. Of course the club twists during the swing. And the sky is blue. but it helps to know which sky are we talking about.
B

Keefer said:
This whole argument is disingenuous. Of course the shaft twists during the swing.
Click to expand...

Down by the ball everything is different in the plane of the right wrist bend/arch w/the club.

This is alpha.
K

Down by the ball everything is different in the plane of the right wrist bend/arch w/the club.

Again, it's disingenuous and going in circles.
B

Keefer said:
The guy in the video doesn't mention anything about Alpha, Beta and Gamma. He's talking about how (in a dynamic swing) a super duper slicer with a cupped left wrist needs to get his left wrist flat to help with that open face. A flat left wirst is more bowed than a cupped left wrist.

Again, it's disingenuous and going in circles.
Click to expand...

Why do you care?

Why do you care?

Why do I care? Because talking in the abstract just to make a point can be confusing. We're talking about a golf swing. I could see someone reading this thread and coming away with the idea that if his left wrist is super duper cupped at the top and he fights a slice, all he has to do is cup the left wrist more to close the face.

That's confusing and not straight-forward. There's a reason you made that video and IMO it wasn't to make an obscure abstract point. There's a dichotomy here. The discussion as I perceived it was Peete's left wirst at the top of his swing. Then we seemed to be trying to be too cute by half in making a point that really wouldn't help a real golfer, but by all means indulge.
C

It's an isolated movement that Kevin was originally talking about. Very simple and isolated. Kevin wasn't trying to delve into an analysis of Peete's swing in a one sentence comment. If you arch your left wrist ONLY and do NOT twist the shaft it will cause the face to be delofted and open in relation to the ball. This is similar to the attack angle concept concerning path. I thought Brian was very clear in his videos. This isn't a new pattern that he's advocating, it's just one small movement.

Now I see why dictatorships work!!!!
B

Keefer said:
I could see someone reading this thread and coming away with the idea that if his left wrist is super duper cupped at the top and he fights a slice, all he has to do is cup the left wrist more to close the face.
Click to expand...

If you fight a slice, doing everything the same, and arching your worst late by the ball, will make the ball go further to the right.

I'll do the worrying. Thanks.
B

At some point all threads must come to an end.

I'll review the points we made on this one:

Calvin Peete does NOT have a whole lot of "lag," or late release, or whatever you want to call it.

He does NOT keep the club "up his left arm" through impact.

He was the straightest hitter of his time.

POINT MADE: You will never have the ball control of a Peete if you have too late a release where the butt of the club is too far forward when the club is parallel to the ground for the last time pre impact. This is because your "resultant path" will be too skewed and your angle of attack too down. You can "allow" for these two big problems if you aim and swing WAY left and tilt and unwind like crazy, ala Lee Buck Trevino.

Kevin Shields brought up the simple fact that arching the wrist alone (without left arm rotation to the plane, left wrist cock, twisting the shaft about itself, and being somewhere else besides right before impact when it is possible to avoid all of the above) will de-loft the club to the plane—only, and de-loft and open it to the target.

Everything else was just show biz on one side and the two points above on the other.

Brian mentioned that Calvin's clubface stays very open until very late in the downswing. So there needs to be quite a fast rate of closure to square the face. Is he such a straight hitter because of this or in spite of it? He seems to be suggesting that this is one of the reasons why he hits it so straight. So for a beginner golfer who has no preference, should we teach them this higher rate of rotation type swing for better control? It is a bit counter-intuitive, although I can see how it can work for one particular golfer who has practiced for many years.

Second question is, how does he square up the face so quickly?
B

I know some of the participants are frustrated, but I think this has been a great thread. I'm someone who always believed that a flat wrist from the middle of the backswing thru impact, was the only real way to play. I believed that bending opened the face, and arching closed the face. Now I see it's much more complex than that and that. I've learned a lot, so thanks TeeAce for your persistence, and thanks Brian for your patience.
M

Even though his face appears open at a point where his hands are just right of his right thigh in the downswing, he has less rotation to do than players with a late release, or lag. Many player's (Dustin Johnson, Davis Love) when their hands are at this point in the downswing have the club short of the last parallel and much more open than Cal's. They hit it farther, but they have to do a lot more rotation in the last 6-10 inches that the hands travel prior to impact.

POINT MADE: You will never have the ball control of a Peete if you have too late a release where the butt of the club is too far forward when the club is parallel to the ground for the last time pre impact.
Click to expand...

Somewhere in a dark corner of my mind a light bulb just came on. And now I feel like I should have known this before somehow.
R

Brian.....if you "subtract" the wrist conditions or whatever from this whole equation....is there a certain "neutral" built into the club and this discussion basically becomes a relationship of the handle to the face type deal with the whole lie angle tool dealie? I agree with you on the arch deal.... the little Mr. Magoo dude would too...arch=push shot tendancy...4-A-3 for the chapter and verse crowd...so if you assume no rotation of the grip end and move it forward open face less loft and vicey versy....regardless of where the club may be in space....so lean the handle and raise it...double dose of open...
B

Richard the Nerd said:
Brian.....if you "subtract" the wrist conditions or whatever from this whole equation....is there a certain "neutral" built into the club and this discussion basically becomes a relationship of the handle to the face type deal with the whole lie angle tool dealie?
Click to expand...

Anything that me, Jeff Mann, and the green wonder of his own world agree on, you pretty much can mark down.

Status
Not open for further replies.